TOP 5 SERVERS OF ALL TIME - PERFECTION, POWER AND PRECISION

Tennis consists of three main strokes which are forehand, backhand and the hardest of them all: the serve. A serve is the stroke which is used to start a point in tennis, which often dictate how the point will be played out. With that being said, a serve is by far the hardest technique to learn and execute in tennis owing to so many technical elements required to perfect the serve. The body positioning, the ball toss, bending the knees and having to strike the ball perfectly to direct your serve to either go into the body, out wide or down the middle are just a few elements which ensure that your serve goes as planned.

All of these aspects take years of practice to develop and perfect and it is definitely not as easy as the professional players make it seem on the television. When professionals serve, it appears that they are doing the same technique every time, however this is not the case. Players such as Roger Federer vary the ball toss and contact point of hitting the ball depending upon where he wants the serve to land, although he is mighty good at disguising this. Now that we have an idea as to how hard a serve is to execute, let’s look at the five best servers of all time and what are the constituents that go into making their serves great and borderline technical perfection. 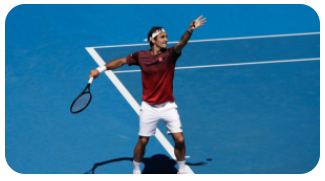 One of the greatest ever players to pick up the tennis racquet stands at a relatively modest height for tennis standards at just 185cm – making his serve all the more impressive! There has never been a more accurate or versatile server in tennis than Roger Federer.

One of the greatest ever players to pick up the tennis racquet stands at a relatively modest height for tennis standards at just 185cm – making his serve all the more impressive! There has never been a more accurate or versatile server in tennis than Roger Federer.

He may not be able to bang down 140mph serves regularly like some of his compatriots, however what he lacks for in pace he makes up for it in spin and accuracy. The fact that he is able to serve to all four corners of the service box on both sides of the court, without giving any real indication from the ball toss just further cements how perfectly Federer has learnt the art of serving.

He is very rarely broken in tennis and has a very good second serve, which kicks up really high or he can also slice it, thereby making it very hard for the opponent to return. It can be agreed upon that the Federer serve is often overlooked as the other aspects of his game are outrageously good as well. He is called the GOAT for a reason after all!

The American legend had an illustrious career that primarily spanned throughout the 90s and early 2000s. During this time frame, he managed to win 14 Grand Slam Titles, which was a record he held for a long time until Roger Federer, Rafael Nadal and Novak Djokovic came along and overtook this achievement. 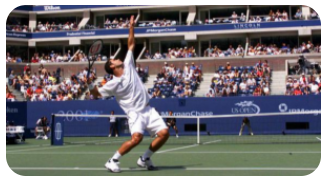 Sampras was well known for his service and attacking style of play, which were the catalysts for all of his grand slam victories and also depicts why all of these victories came on fast surfaces like grass and synthetic courts. If this was a list about who has the best second serve, the top spot would probably go to Sampras, owing to the number of big points he won on his second serve more often than not with aces!

Sampras had such a fluid and relaxed motion that allowed him to hit such a heavy ball with huge amounts of spin, which made it both difficult to read and even harder to return with any purchase on it. It was also so good in the clutch moments, allowing him to find the lines late in tie breaks, meaning it goes down as one of the best of all time. 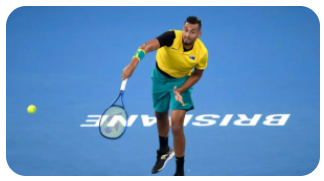 The controversial Aussie is well known for his on-court antics, tantrums, fights with umpires and having one of the most entertaining styles of play with his trick shots, huge ground strokes and a monster of a serve. Love him or hate him, a true tennis fan cannot deny that Kyrgios possesses an unbelievable serve.

What makes the Kyrgios serve truly great, is the fact that his action is so simple and uncomplicated, yet he regularly bangs down serves at over 130 MPH consistently. Kyrgios, unlike the previous two players mentioned on this list, prefers to go flat with his serve rather than using a lot of spin.

These booming serves also have the ability to paint the lines, giving him a much-needed combination of both placement and power, something that a lot of good servers are unable to achieve. Kyrgios also does not hold back on his second serve, often coming up with flat aces during crucial times of the match which further cements his place on this list.

The tall American standing at a remarkable 208 cm is probably the most illustrious player to rely solely on his serve. His serve is the only reason why he has been able to compete with the best players in the world. 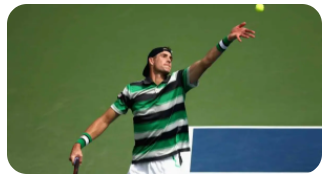 No offence to the big American, but what he lacks in every other aspect of his game, he more than makes up for it with his serve. In fact, Isner makes 70.4% of his first serves in. That’s good for the highest percentage on tour and when you have a serve like Isner’s, that means a lot. And even if he does miss, his second serve might just be the best ever. Isner’s second serve is known for its crazy spin and looping height. His ability to impart so much upwards spin on the ball is exactly what makes the Isner serve so effective. His first serve regularly is hit at 140 MPH, with some serves having the ability to go up to 155 MPH. This, in addition to possessing arguably the greatest ever second serve in the game, is one of the reasons why he has managed to stay in the top 20 in the world for so long and also why he has made it to this list! 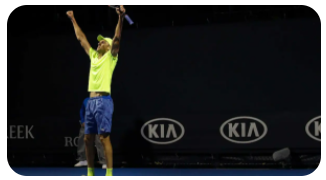 The towering Croatian stands at 210cm tall, so judging by that alone, it is quite evident that Karlovic possesses a huge serve in his repertoire. Through incredible placement and power, Karlovic has been able to use his height to develop the most effective serve in the history of tennis.

Karlovic has the most aces in tennis history with 12,530, the highest serve rating ever, the highest percentage of service games won, and the highest percentage of first serve points won as well. However, one of the primary reasons he has not been as successful in tennis as the others in this list, is because the other aspects of Karlovic’s game in comparison to his rivals lack significantly. With that being said, nothing can be taken away from his serve which is the most explosive and consistent that tennis has ever seen.