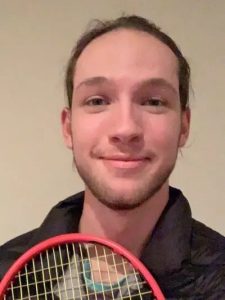 Hi there!
Coach Cal here,
So as you’re well aware, Future Demand Tennis has opened up a blog series and I thought I’d take this opportunity to look at tennis from a more mental perspective. To look at life on court through rose-tinted glasses if you will. Look at its emotional connection and things that have applied to life and tennis to not only make me a better player
but a better person.

So for Numero Uno, I’m going for the question we all start with:
‘Why tennis? What makes tennis worth it?’

Well… I’m glad you asked…
(You most certainly didn’t ask but it’s my blog contribution so work with me here!)

Tennis is the chameleon of the sporting world. She’s the same game, but she blends into whatever environment you put her in.

(Also to address the actual question in your head, ‘why’s tennis a she?’… I was taught at a young age that all the most beautiful things in life were a woman. Who said chivalry is dead? However, I digress…)

Tennis is slightly different to your average chameleon however, she transforms those who enter her environment.
You could enter on the court a child picking up a racket for the first time, a seasoned veteran fresh off their 20th ITF title victory or some random who saw some person in a headband ‘grunt funny’ on tv and decided to give it a try to see if it was really necessary.

You walk on the court, you are now a tennis player.
Congratulations.
No exceptions.

It can be a relaxing hit, a lesson, a match. She comes in many different colours.
Clay courts, grass courts, hard courts,
The concrete ya uncle had leftover on a job for some couple in Toorak that they clearly over-budgeted for.
Slap some lines and a net on that bad boy and you have a court.

World-class courts aren’t the only thing that can be supplemented though. Rackets aren’t always necessary either, ask the rather convenient ‘2 by 4’ I used every time my parents took my rackets for ‘not doing my homework.’

(In hindsight, was probably why I had great hand-eye coordination at such a young age… and also why that homework still remains unfinished)

Don’t even need friends. Just a wall and a ball and ya trusty plank of wood. This was especially convenient for me… little Cal had a hard time making friends.

But it didn’t matter.
I had already met the love of my life.
And she was the sweetest.
(Ohhhhh yeahhhh, I’m about to get really dramatic on ALLLLL OF Y’ALLLLLL)

Tennis, like most sports, became a retreat for me. It became my armour against the world, where the bad things would ricochet off of me. She was my protection from all the bad things around me.
Bad day?
Something as simple as a ball and a racket and my imagination could fix it.
Being bullied?
Who needs their understanding when I understood something as perfectly as I understood tennis.
Can’t seem to do anything right?
Who cares! I couldn’t do anything wrong on the court.

My front yard garage became Rod Laver arena and I became the greatest Australian player since the stadium’s namesake every time I asked my dad to move the car out the way, provided he wasn’t sound asleep, in which case we called rain delays and hoped that weather would pass (I.e. my dad would get off the couch).

Back then I was going for the all-time male record of 15 grand slams (jeez how that’s changed) and I was allllllways fighting back from 2 sets to love down in the final, carrying an injury because apparently I had to also be the biggest badass in history while I did it.

Tennis never judged, she never laughed at me and my imagination. She egged me on! She added to it with every off bounce, with every solid contact with every stroke of my racket I painted the picture of happiness, me, dripping in sweat, a smile as wide as the great Australian bite and a mother at the doorway calling me to dinner for what she always claimed to be ‘the hundredth time boy!’

Tennis was everything to me.
I loved her and she loved me.
And I didn’t need anything else.

Now I’m aware of everything that’s happening in the world, and at this time, tennis is so close and yet so far.

But you have a wall, you have a court. You have a game that will open it’s armed to you and embrace you as an equal.

So, dear reader, my fellow tennis player.
It doesn’t matter if it’s your first time with a racket or whether you have hand-shaped grooves moulded into the damn things grip.
You can still have her around.
You may not have the same experience with the beautiful game (no not football) that I do. But you have a golden opportunity to get acquainted again and again and again.
All it takes is a ball and a little imagination.

Times may be tough, but trust me, tennis will be there for you, just like she was for me.
She can be your friend, your ally, your safe harbour. And god do I love her for it.

So does that explain it?
So if you’ll explain it, it’s 9 o’clock and I’ve got a night session match… I had to keep Fed waiting…

Thank you for reading,
I hope to talk again soon.